A few weeks ago I published an idea for goods transportation game. I was think about it a lot. I wanted to make game smaller, simple, more elegant. Let’s see if I got it right this time.

Determining first player. Mix the cards, take one from the top until you find a card with a resource that it is in the game. The owner of that resource will start the game.

Preparation for the game. Give each player his player board, resources, port master, traveler and one ship. Ship should be placed in the „loading“ side on the spot with no action.

Mix the deck. Place the deck in the middle of the table, open 5 top cards.

Main resource. During the game player can get resources of all other players, however the main resource is pictured on his player board and only main resource can be used as the payment.

Ships. Each ship can carry maximum of three resources, they can be the same or different type. Ship that are full in “Loading” part leave the port immediately. There is no action for that. 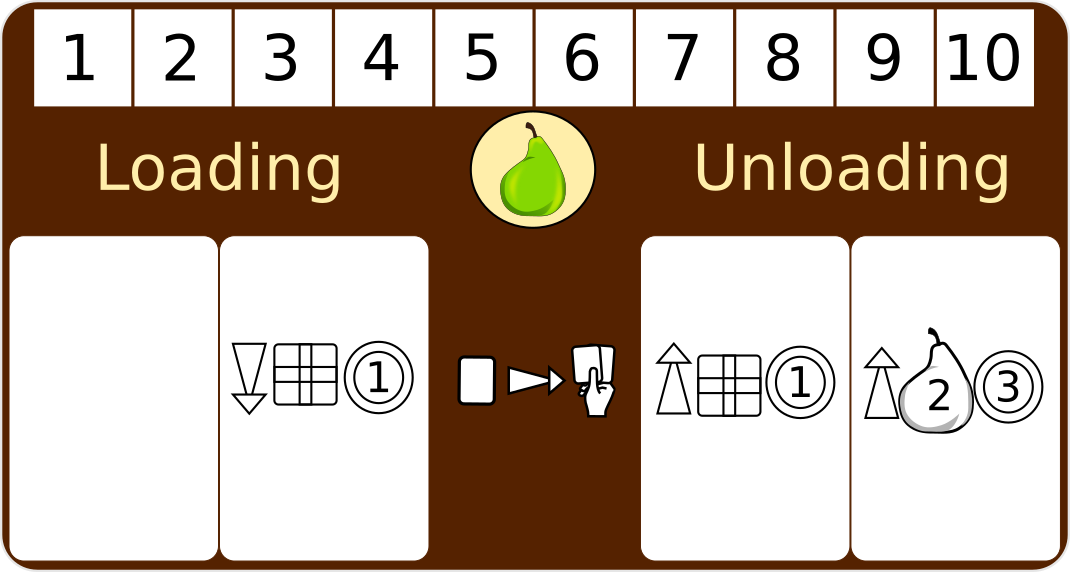 At the beginning of the game there are five action spots, however only four actions, because the first spot is empty. Any spot can be replaced with the action card from the deck.

First two action spots are in loading area, it means that they can be blocked by ships. When the ship is on the spot, that action can’t be used until the ship leaves.

Middle action is on the pier, so it can never be blocked by the ship.

The last two actions are in the unloading part, they too can be blocked by the ships.

First action – empty. During the game it should be covered with an action card.

Second action – Unload one item for one coin.

The card player has chosen must be put in the port. He can choose any spot that doesn’t have ship on it (even the spot under port master). If the spot already has a card, that card has to be discarded.

Fourth action – load one of any type of resource to the ship for one coin.

Fifth action – load two pears to the ship for three coins. This action depends on the type of main resource. Main resource is different for each player board, however the idea of the action is the same.

Players use port master to mark chosen action. Players can’t choose the same action twice in the row. Port master can only be move to the spots that are not taken by ships at the moment. If at any moment in the game port master can’t be moved, all ship that are in loading area leave the port for their neighbor on the left.

New ships always arrives and docks in “Unloading” part. Keep in mind that ships arrive to the port on other players turn, not active player.

Only ships in “Unloading” part can be unloaded.

Ship that are full in “Loading” part leave the port immediately. There is no action for that. One ship can have maximum of 3 goods.

Ships can only arrive to the port if there is at least one empty unloading spot in the dock. Spot that has a ship or port master on it, is considered full. No ship can dock in the full spot. If all spot in the unloading part of the dock are full, when ship moves to the next player clockwise.

Most of the cards are very similar to the cards on player boards, however there are a few more interesting cards. Lets talk about them.

First card – pier extension. This card is completely different than any other card in the deck. All the cards player has to be place on player board. This one is placed next to player board. This card by itself doesn’t have any action, however it gives player additional action spots (i.e. posibility to place other cards on top of it). Player can extend his “loading” or “unloading” part of the dock. Ships also can dock on this card. After the player placed the card, it can’t be changed. So if player placed card in the “Unloading” part, later he can’t change it to “Loading” part.

Second card – home call.  If player has only one of his ship, he gets the second one. If player already has two ship, he can take one of his ship from any other player and place it into unloading part of dock if he has empty spots.

Third card – double whammy. Most of the cards have one action on them, however there are a few cards that has two actions. When card is activated both actions are executed. In this case load two any type (can be the same or different) of good for one coin and unload two any types of good for two coins. The order how actions are executed is decided by the player. If player doesn’t have ships in (un)loading part, he still can perform one of the actions.

Fouth card – poker face. It’s similar to the middle action on player board, however, in this case player takes two card. If second card is next to the first one, player doesn’t need to pay any additional fee. If there is a gap between the cards, player has to place one of his main resource on each gap card.

Design decisions. Okay, so what has changed? Most of the things. In this game the main focus is player board instead of the cards. In the previous version cards had two action and player had to choose which one he want to execute. In this case most of the cards have only one action, in case of cards with two actions, both are executed.

This game doesn’t have coins for tracking, instead there is a progress bar. To be fair, the progress bar is kind of odd and I myself haven’t seen anything like that. Still, there should be at least one game that uses this kind of tracking bar.

Originally I wanted to make 60 cards, but I miscalculated and now the game has 63 cards.

Would you like to playtest it? PDF files with game cards and boards, however you will need your own ships, items to transport and peoples for port master and traveler. Any feedback is welcome.