Rivers are good way to transport goods. So let’s transport some goods.

Determining first player. Mix the cards, open the top one, the owner of that resource will start the game. In case card doesn’t have a resource on it, draw till you find one.

Give each player 3 starter cards. Mix the rest of the cards. Place the deck in the middle of the table, open 5 top cards.

Playing the game. Player has option of choosing one of three actions: take a card, play a card, reload his hand.

Take a card. Player can take the first card to his hand for free, however if he wants to take second, third and so on card in the row, he has to pay one of his main resource (put it on the card). If there is his main resource on the card, when he took the card previously, he still has to place a new resource. During his turn player can only take one card.

After the first card is taken, cards slide down and new card from the top of the deck put in the fifth place.

Play a card. Each card has two actions. Player has to put the action he want to use on the top. See cards, for more explanation.

If player has at least one card in his hand and he want to reload his hand, he has to pay one of his main resource for each card he wants take.

If player would like to take ten cards (which would be very unwise), in that case he should give each player a resource starting with the player on the left and going around until all ten resources are given away.

And that is the core of the game.

Main resource. During the game player can get resources of all other players, however the main resource is pictured on his player board and only main resource can be used as the payment.

Ships. Each ship can carry maximum of three resources, they can be the same or different type.

Player boards. Player boards represents ports that belongs to the player. New ships always arrives and docks in “Unloading” part. If player want to load the ship, he can move it to the “Loading” part of the dock (it doesn’t count as action). It doesn’t matter how much cargo ship has, it can be empty, full or in between, player can move it to “Loading” part. He can move the ship at any point of his turn. He can move before he does the action or after he does his action.

Only ships in “Unloading” part can be unloaded. 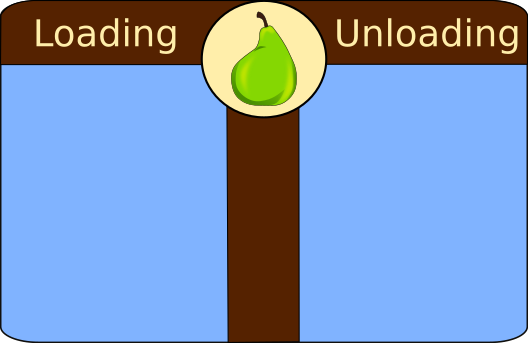 There are exactly the same cards for each resource in the deck.

Each player starts the game with the same/similar three cards. These starter cards belongs to the player whos’ main resource is pear.

First card has two actions: top action is to load one pear for one coin; bottom action is to send one ship to the player on the left.

Second card. Top action: to load two pears for one coin, if you have only one pear or only one space on the ship, you still can use this card and in that case the action becomes better because you load one pear, but still get one coin. Bottom action: send two ships to the player on the left. 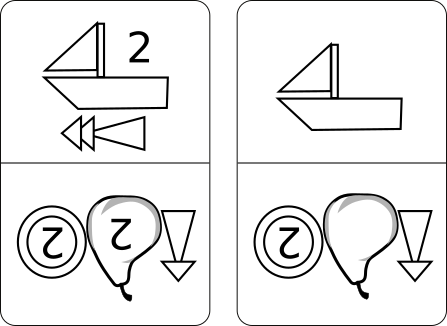 All the cards follow the same logic and the same symbols.

Second card. Top action: call a ship. If player has only one of his ship, he gets the second one. If player already has two ship, he can take one of his ship from any other player and place it into unloading part of dock. Bottom action: load one pear for two coins.

These are special cards and they allow to mess with other players.

First card. Top action: take to cards from your discard pile into your hand. Bottom action: all the ships that are in loading part of everyone's docks leave to their neighbor on the left.

Third card. Top action: all players change their discard pile with they hand. Botton action: get one coin.

Design decisions. In this game you transport vegetables because I had pictures of them drawn in the past. Originally I was thinking about transporting coffee, wood, bricks and similar stuff, but that would require me to draw some additional items. As the items that are being transported is not essential I decided to save my time. And this time I didn’t even made a design, just basic functional art for testing purposes.

Can hording ships be a problem? In theory – yes, however I am not so sure about this strategy in real life. I need to do more testing to see if players go for this strategy.

Would you like to playtest it? PDF file with game cards, however you will need your own ships, items to transport, coins for scoring and to make player boards. Any feedback is welcome.

<- Visiting Kaunas V2 Visiting Vilnius ->
Would you like to discuss Let the rivers flow in discord chat?