Let’s talk about public transportation one more time. I explained the theme in the original post and later created second version, because I didn’t like mechanics in the original. Let me present you with the third version.

In this game, you take a task of caching people, who don’t want to play for public transportation. Bus stops at 4 stops, but you can choose to check only 2 of them, be wise about your choice, because other players will also want to check the bus.

Preparation for the game: Give each player 4 passenger, 4 cheaters cards, 5 coins in value of 1, their color auction tokens and meeples. Set bus stop board in the middle of the table.

Choosing the conductor. In this game conductor will act as tie breaker, he can also act as gamemaster. You can decide who is a conductor by random e.g. the one who rode public transportation latest or the host could grab a handful of coins and each player guess the total value of the coins. The one who guess closest will be the conductor.

Playing the game. The game consists of three phases: creating the bus, auctioning, checking the passengers.

PHASE I: creating the bus. Motivation of the phase: in this phase players will create the bus. There are four rounds each of them represents one bus stop.

Repeat the same actions two more times until each player won’t have any cards.

PHASE II: auction. Motivation of the phase: in this phase players will choose which bus stops they want to check, they can check only 2 of 4 bus stops.

Each player looks at their 4 auction tokens and chooses 2. Places them face down in front of them. Let’s say Ann has chosen 1 and 4, it doesn’t matter the order how she puts the tokens. She can put 1 and 4 or she can put them in 4 and 1 order.

After choosing the tokens, each player decides how much they want to bid on each token. Each player has 5 coins and they have to distribute it between both token. The following might happen: Ann decides to bid 4 coins on the first token and 1 coin on the second token. Ben decides to bid 2 coins on each of the tokens and 1 coin to keep. Cecile decides to keep all 5 coins to herself. All the choices are totally legal in the game.

After everybody placed their bids auction tokens are opened and they values are revealed. Now we have to decide the winner of the auctions. Lets’ start with bus stop nr1 and go up checking each bus stop.

• Nobody has chosen the bus stop – there is nothing to do.

• One player has chosen the bus stop – he is the winner of this auction and he should place the meeple at the bus stop.

• Two or more players have chosen this bus station – we have to decide who is the winner.

We also have to look at the bid values. Each player has to give away to the bank all the money that he bid more that the lowest bid for that bus station, however if somebody decided not to bid at all, no need to give away anything. Example nr1. Ann bid 5, Ben bid 2, Ann has to give 3 to the bank, Ben keeps all his money for this bus station. Example nr2. Cecile bid 2, Ben bid 2, because everybody bid the lowest amount for this bus station, they can keep all they money. Example nr3. Ann bid 5, Cecile bid 0, so Ann can keep all her money.

The winner of the bid takes all participants meeples and decides the order in which players go.

After all meeples there assigned to their positions we go to the next phase.

Bus comes to the first station. Conductor takes top five cards from the bus and place them face down on the table. There might be the case that nobody has chosen first station, in that case bus goes to the second station and conductor places five more cards. In very rare cases again nobody has chosen second station, bus goes to the third station and conductor places five more cards.

After card splitting was done, second player chooses the group he wants to check. One card each player can check for free, for every next card he wants to check, he has to pay 2 coins. All cards that he decides not to check, can be checked by the next player in the line paying only 1 coin. If player opens a card and it’s a cheater, he gets 5 coins immediately and can use these coins for paying to open next cards. If player opens a card and it’s a passenger, he get nothing.

After player two is done, player three goes if there three players at the bus stop (and so on) and if there are only two players when the first player does his actions. All cards that were left unchecked after first player did his actions, go to the next bus station.

End of the game and score counting. After the bus was checked in all four stations the game ends. Player with the most money is a winner. If two or more players have exactly the same amount victory is shared.

Design decisions. Did you notice that the cards players choose in the first round of the first phase goes to the fourth bus stop? i.e. players are creating the bus from last stop to the first one. This might trip some people, who might think that the first cards they have chosen will be at the first bus stop.

This game has a lot of interesting mechanics. There is auction, splitting and push your luck. As a small and quick game it might be too complex. What do you think?

Is it better than original idea? I think yes, this version still has luck, but players have more control and can make interesting decisions. Is it better than version two? I don’t know. There is quite a lot player interaction in this game, but some people might not like it. For example winner of the auction decides the order of the players and the first player can only split, he does the choosing last. Some people might view choosing the player order as mean action.

Art. The art style I described in my original post, as this is evolution of the same theme, I won’t go into details here. I made a mock-up of bus station. It’s functional without any art. 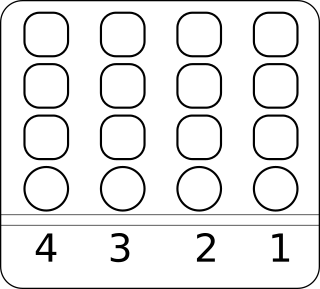 The first place in each bus stop is round to remind that first player only splits, but does the choosing and checking last.

Would you like to playtest it? PDF file with game cards and another file for a bus stop board. However you will need your own money and your own meeples. Any feedback is welcome.