This is my second game in the visiting series, however this one is not a small game for tourist. This one is big. Original idea was to represent some cities, but as I started thinking how to represent Kaunas best, the game could fit into a small frame. Let’s talk about it.

In this game you are building the main street of the city – Freedom Avenue. Yes, it’s the actual name. Another thing that’s important to know is that this street is only for pedestrians. No driving.

Determining first player. Roll the dice, who has the lowest number will be starting player.

Preparation for the game. Mix building cards, place them in the grid appropriate for the player count: 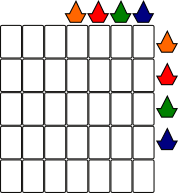 Mix upgrades cards and place next to the event deck.

Give each player the starting building (Modern art museum) and 8 coins. Place tourist meeples and grande meeples, dice, money that it would be easy to reach for everyone and now you can start the game.

The goal of the game. Person with the most money at the end wins the game.

Buying new buildings. Player chooses the ship of his color and moves it. He can choose the one on the side of the column or on the top of the grid. He can move only one ship. He can move as far as he wants, but he can’t stop at the spot that is already taken by another player. 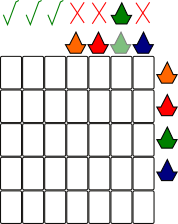 Player gets the building where two of his ships intersect. He has to pay for that building as much as he moved multiplied by the number on event deck. So if he moved 3 cards from his current position at the beginning of the game he has to pay 3 coins for a new building. 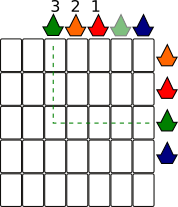 If player doesn’t have enough money to pay for that, he can’t move that far. In extremely rare cases when player has no coins, he doesn’t move his ship and doesn’t get any building.

After taking the building card player has to place that card in his city. The street consists of two rows, because of walking part in the middle and building on each side. At the start of the game each player has only one building, so it’s one row.

Player can put his building at the end of any of his two rows. Buildings are always placed from left to right. So player starts on the left and continues building his street to the right.

The building card taken form the grid is replaced by the new card from the top of buildings deck.

Player takes 3 dice and rolls them. Dice can be allocated to event cards or executed for actions of their pip values. After assignment is done, dice are executed from the highest value to the lowest. For example if player has 5, 3, 2. First he will execute 5 dice action, when 3 and 2 last. If there are two or more dice with equal values, player can decide the order of execution.

5 – Player can place this die on the left side of the grid. Where die and players’ ship intersects he can get that building for free. Other players can also get building where die and their ships intersect, however other players have to pay two coins multiplied by the number on event deck. 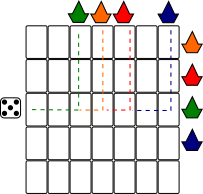 If a player rolls more than one 5 die, he can use all of them to get buildings, however they can’t be placed on the same row.

4 – Player can place this die bellow the grid. Similar like in case of 5. Where die and players’ ship intersects he can get that building for free. Other players can also get building where die and their ships intersect, however other players have to pay two coins multiplied by the number on event deck. 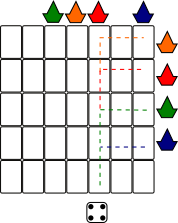 If a player rolls more than one 4 die, he can use all of them to get buildings, however they can’t be placed on the same column.

1 – Player can review discarded event cards and place one event card into face up row.

Player can choose which card and which time zone activate. In case of face up cards player knows exactly which options he can choose. In case of face down cards player doesn’t know which options are there. If the chosen option doesn’t exist on the card, card is moved to face up zone. If there are empty spots in face up zone, card should be placed in the empty spot. If there are no empty spots in face up zone, player can choose which card to cover. It means that when the top card is executed, the below card will come back into play.

If chosen time zone exists on the card, all player move amount of tourist equal to pip value. E.g. 6 die will move 6 tourist, 1 die will move only one. Grande also can be moved if he is in the building.

After movement is done all player get appropriate amount of money.

Important: doesn’t matter which player activates the moved, all players get to move they meeples if they have a valid options to do so.

Used event cards go to discard pile. If there are empty spaces in face down cards row, when new cards from the deck are placed.

Note: After moving meeple place it on the side that you could count how many meeples you moved and how much money you earned. After all calculations are done, change position of your meeples to standing one.

If no die is assigned to event card, player has to place as many coins as he has buildings in the longest row to a face down event card of his choice. 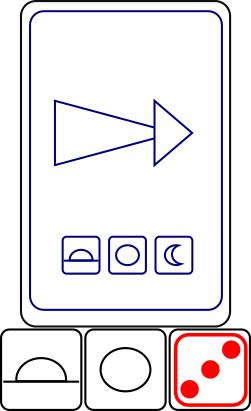 In the face up row we see level 1 card that allows movement in all three parts of the day, however the die is in the third spot which mean that movement will be related to evening part. Die shows the value of 3, which means that three meeples (or two regular meeples and one grande) will be moved.

Three meeples have to be moved (die value) into building in “Other” category. Bank can only accommodate one meeple, so other two will go for Pool.

Three meeples have to be moved. The last building meeting requirements is Bank, however Bank can accommodate only one meeple and it already has one, so it’s full. Two meeples will be moved to the Pool, as there are no buildings meeting criteria, the third meeple will not be moved.

Grande tourist. Grande tourist is very rich, so he always pays double the price. When in the city Grande moves the same as regular meeples, however he can only come in the city using die with 6 value. When Grande comes into town, he can land on any building that has free spots. Wise choice would be to land him in the first or second building, however it can be the last building in the town if player wishes so (on the last turn of the game it could be a good move). Player can also choose any time zone if building has more than one.

Level one cards are active in all three time zones, second level – two, third level – one.

Each card has a direction: people are coming to a building or leaving it. Some cards can have both actions. Buildings can be market buy the category e.g. restaurant, shop or it can be specific building e.g. sushi restaurant.

Event cards are executed by all players at the same time if they meet the conditions.

Building cards. Each card has a category icon and building icon. Three time zones: morning, noon and evening. Each time zone can have different prices for the tourists. Buildings can also have maximum capacity. There can’t be more tourists on the card than maximum capacity. However prices and capacity can be changed using upgrades.

Upgrades. Player can buy an upgrade using die with value 3. Upgrade can be assigned to one building during the game and it can’t be reassigned later to another building.

To buy an upgrade player can take any card from face up row. If there are no cards of he doesn’t like what he sees, he can take up to three cards from deck. Before taking the cards from the deck player has to make decision how many cards he wants: one, two or three. If he takes one cards – it’s the upgrade he gets. If he takes two or three cards, he can choose one of them, other cards will be placed in face up row next to upgrades deck.

Game end and final score. The game ends when there is no cards in event deck. Winner is the person with the most money. In case of a tie, winner is person that has more buildings.

Inspiration. Kaunas is a boring city. I was thinking a lot what can represent the city. I saw Santa Monica review and it dawn on me: Kaunas has main street, so the Santa Monica idea could work. I have never played Santa Monica, so if you like that game, you might not like this one.

Idea from grande meeple is taken from Viticulture, but it’s used in completely different manner.

Luck factor. Luck factor is very big in the game. First of all, building cards come in random. You can choose which building you want, but if there is no such building in the grid, there is nothing you can do.

Rolling dice is always a big luck factor. If you never roll six (which is very unlikely) grande meeple will never come to your city.

Event cards also come at random and player has to bid blind on them. To mitigate that, you can use one of your dice to draw event cards, however you can’t use cards yourself in this turn. By drawing event cards player is helping other players more than himself.

In the first version I tried to make building close to real. As I told you before Kaunas is a boring city, so it means that nothing works in the morning, everybody work at midday and a few restaurants work in the evening. The game was very unbalanced. So I had to rework the buildings. I really wanted to include Bank, however it didn’t fit in any category. I also wanted to add: Hotel, Hostel, Sushi restaurant, Strip club, maybe I’ll change buildings for the next version of the game or this might be notes for expansion.

I added Park, to clog up the space in building selection grid to make it harder for players.

Currently I have 4 categories building, but amount of different buildings in them is not equal. Should I make more categories, but with exactly the same amount of buildings?

Would you like to playtest it? PDF Files with building cards, upgrade cards, event cards, you will need your own meeples, dice and money. Any feedback is welcome